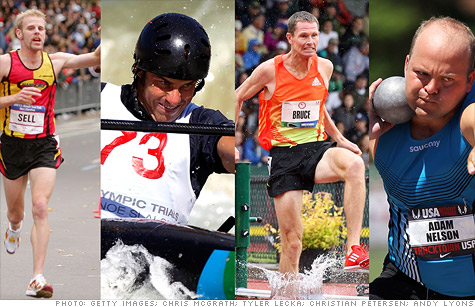 NEW YORK (CNNMoney) -- American Olympians are just weeks away from representing their country in London, but many will return home -- medals won or lost -- to face significant financial challenges.

Unlike athletes in many other countries, American Olympians receive no direct support from the federal government.

And the U.S. Olympic Committee, with a $170 million annual operating budget spread across all sports, offers health insurance and stipends to only a limited number of competitors.

Athletes, without government support, are instead forced to cobble together an income made up of prize money, apparel contracts, grants and part-time work.

Only 50% of American track and field athletes who are ranked in the top ten in the nation in their event earn more than $15,000 a year in income from the sport, according to a survey conducted by the USA Track and Field Foundation.

And most athletes not ranked in the top ten nationally fare much worse.

"There is an incredibly steep drop in earning power from the elite of the elite athletes to individuals who are just slightly lower ranked," said Jack Wickens, who conducted the survey and oversees the foundation's grant program.

Adding to the uncertainty, most apparel contracts signed by track and field athletes contain provisions that result in sharply lower income if an athlete is injured or fails to perform as expected.

How much am I worth?

Adam Nelson, a two-time silver medallist at the Olympic Games, has seen both sides of the divide, having climbed to the top of his event -- the shot put -- after graduating from Dartmouth College.

Nelson said the viewing public is generally unaware of the financial sacrifices made by athletes.

"If you don't perform on the couple of days that matter, you will lose almost every opportunity to make money in this sport -- and it will happen very quickly," Nelson said.

Nelson, who also has a graduate degree in business from the University of Virginia, has gone to near-ridiculous lengths to support his wife and two children, including a scheme that involved auctioning off a sponsorship on eBay.

"Apparently I am worth $12,000 for a month," Nelson said, referencing the winning bid from MedivoxRx. The creative approach was needed, Nelson said, after a sponsor dropped his contract immediately after he won his second silver medal at the 2004 Summer Games in Athens.

"My thought was that if someone could auction a piece of toast with Jesus on it for thousands [of dollars], that I could auction myself for a similar amount," said Nelson, now happily sponsored by apparel-maker Saucony.

Nelson, who also has five world championship medals to his name, said that athletes who compete in the shot put face additional financial pressures, as the event is far from the limelight.

Brian Sell, an an Olympic runner who made the U.S. team for the 2008 Beijing games, should have had an easier time. He competed in the marathon -- one of the sport's biggest attractions, and one that has big money available at races like New York, Boston and London.

But Sell, who made 50% of his income from performance-based prizes at his peak, said that it took him years to make any real money in the sport.

During a particularly lean period, before he joined a team of athletes sponsored by apparel-maker Brooks, Sell's income was below $25,000 for three consecutive years.

"It's a small percentage of people who make a real living in this sport," Sell said. "And if you didn't run well, you didn't get paid."

To illustrate just how precarious major payday events can be, Sell pointed to his run at the Boston Marathon, where he ran 26.2 consecutive miles at under 5:00 per mile pace, to capture fourth place and a check for $25,000.

"That's more than I sometimes made in a year," Sell said. "And if I were injured, that's a big old goose egg."

"It was amazing," the marathoner said. "I went MC Hammer-style for a while there and bought two or three motorcycles and a new truck."

Sell, who now works as a scientist in the bio-safety division of Lancaster Laboratories, pointed to another trade-off: Years spent competing are years not spent climbing the corporate ladder, or learning new skills.

"If I had put the past ten years of work and intensity into anything else, I would be much further ahead financially than I am now," Sell said.

When the Olympics don't call

Olympic glory itself can boost athletes' income. Americans who win gold medals in London will receive a $25,000 bonus, while silver medals will bring $15,000 and bronze medal winners will net $10,000.

But some elite athletes won't even get that far. Consider the case of Ben Bruce, a Californian who specializes in the steeplechase, an odd event that requires contestants to jump over hurdles and a water pit during a run that measures just less than two miles.

Bruce failed to qualify for the London Games at the recent Olympic Trials. He needed to finish third in the event final, but faded to fifth. The loss puts him in the unfortunate position of being one of the sport's best athletes to not make the team.

"There are a lot of us that are technically living under the poverty line," Bruce said, referring to a period between 2008 and 2010 when he had no sponsors. "In this sport, nobody is looking to give you a free ride."

Yet Bruce isn't ready to hang up his spikes. After several tough years when he worked delivering pizzas and cleaning houses, he has picked up an Adidas sponsorship, and is now working with a training group that helps to defray the cost of competing.

While a money-earning hierarchy exists within the insular world of track and field, there are also vast differences among sports.

Basketball players, for example, make millions in the NBA, and yet will walk into the Olympic stadium next to lower-earning athletes from other sports that, despite their relative obscurity, require significant investments in equipment, training and time.

(Related: When Olympic athletes have to moonlight)

Scott Parsons, a 33-year-old Maryland resident, is scheduled to compete in the kayak slalom event in London. It will be his third trip to the Olympics.

Kayak athletes don't have the same sponsorship opportunities available to track and field athletes. "It's hard," Parsons said. "I think a few people are getting some money here and there, but it's not much at all."

To make ends meet, Parsons has worked part-time jobs, including one at Walter Reed Army Medical Center. He also estimates that he has lived in five different basement apartments over the past ten years.

But Parsons is content with the path he chose.

"This is the kind of sport that you do because you love it," Parsons said. "I'd be doing this sport whether it was in the Olympics or not."

Nelson, the shot putter, described the financial hardships faced by athletes today as a continuation of a decades-long battle to be treated as professionals.

(Related: The very big bucks behind the Olympics)

The disputes date back at least back to Steve Prefontaine, the long-distance runner of the 1970s who famously thumbed his nose at the constricting rules of Amateur Athletics Union and the NCAA, which forced him onto food stamps.

"I don't think anything has changed," Nelson said. "I think Prefontaine was one of the first people in this country to see the system for what it is."

As evidence, Nelson pointed to the lucrative television contracts, and the evolution of the Olympics as a major-league business -- with little noticeable benefit to athletes.

"All kinds of people involved in the Olympics are making a lot of money off the hard work of athletes. And those people don't have to pay our salaries, and that is a shame," he said.